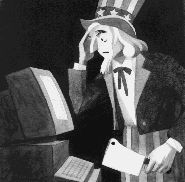 I first created Uncle Sam’s Budget Balancer as a public service during the 1992 presidential campaign. At the time I was president of Banner Blue Software, a company I founded and have since sold to Broderbund Software. The program has been updated with new budget information several times. When I left my company I retained the rights to the program, available as freeware. My objectives today remain the same as they were in 1992:

First, I want to demonstrate the advantages of using a computer to educate citizens about dollars and cents public policy issues like the federal deficit. Full, accurate, undistilled information can be provided in a form that is much more approachable than the hundreds of pages of text from which it is condensed. And, as a “working model” of the budget, citizens can quickly test the validity of their ideas and preconceptions.

Second, I want to empower citizens to evaluate the performance of their representatives and the accuracy of the media by giving them a powerful analytical tool. Quite literally, citizens can see whether what they are told “adds up.”

Third, I want to show that the budget can be balanced and what it takes to do so.

To me, balancing government spending transcends politics and economic theory–it’s a simple matter of discipline. I hope you agree.

If there is sufficient interest, I will convert the program to run on the Web itself.